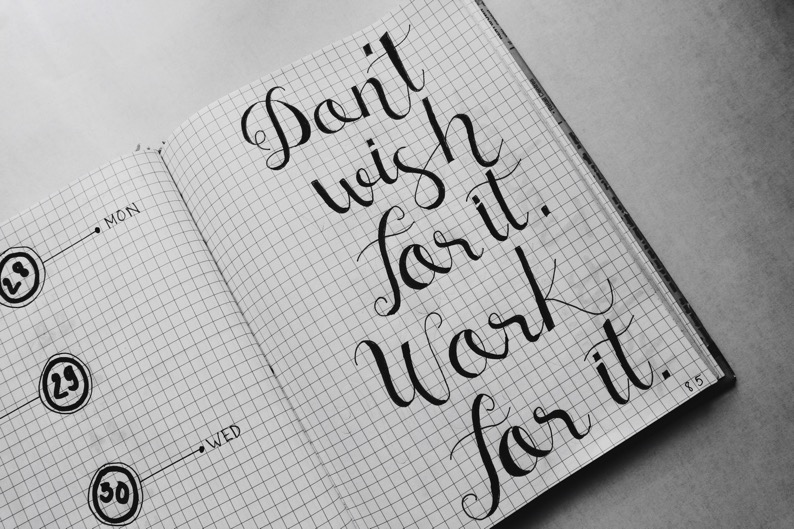 I was looking for a necklace box that was on the upper shelf of my organized and ample wardrobe. It wasn’t easy as it was hidden between my section of hats accessories, handkerchiefs and jewelry. When I was about to find it, I came across my old teenager notebook. I gently fetched it and opened it to discover what was inside of it as I hadn’t seen it for several years. It was full of notes, drawings and amazing calligraphy.

These calligraphy letters reminded me of  a suitcase that I received many years ago. It was a wonderful suitcase full of colorful monoline pens with different styles of points and a traditional calligraphy exercise book. After receiving this gift, I started doing my calligraphy when I was a little girl. I instantly fell in love with the monoline pens, they allowed me to change the thickness of the letters and their shape as they were so flexible. I created many greeting cards that surprised people when they received them on special days and occasions.

In 2017, the Manuscript Pen Company founded World Calligraphy Day to bring together all calligraphy enthusiasts and celebrate the art of calligraphy. The day of celebration offers a chance to examine, practice, learn and commend the innovative and lovely work of art.

It is estimated that the origin of Calligraphy with ink and brushes dates back to ancient China during the Shang Dynasty (206 BCE – 220 CE). The earliest extant examples of Chinese writing are the inscriptions that appear on so-called oracle bones (animal bones and turtle shells) and on bronze vessels.

Essentially there are three main types of calligraphy: Western Calligraphy, Islamic Calligraphy and Oriental Calligraphy. Each type reflects the language and handwriting of a different region of the world.

Let’s see the differences between traditional calligraphy and modern calligraphy:

1. The traditional types of calligraphy are ruled by strict rules, specific, structural and precise measures of heights and angles that form different letters combining thin and thick strokes. They are elegant and sophisticated letters using a neutral color palette.

-Brush and ink
-Dip pens:
-The nib. It is the traditional instrument of calligraphy. The nib is dipped in ink.
-The holder: straight holder or oblique holder.
-Monoline pens
-Paper: Calligraphy pads are available in A3, A4 and A5

-Brush pens
-Pencil
-Classic dip pens
-Markers
-Broad nib pens
-Paper: calligraphy pads are available in A3, A4 and A5

There are two ways to construct letters with a brush pen:

1. A fluid construction way: this method resembles the movement and strokes used in classical calligraphy with a dip pen creating Copperplate style letters.

2. Fragmented stroke method: the letters are constructed by painting style based on very fast movements.

Instead of  being in front of a computer or watching your favorite TV program comfortably on your couch, you could also start thinking about practicing other entertaining activities for yourself such as calligraphy.

The art of calligraphy is no longer a staple of primary education, like it was meant to be when we were children. If you are a lover of artistic letters and calligraphy, you can start practicing with traditional script books that are easily found on the market from $4 up to $30 in bookstores or on online websites such as Amazon. Later if you are fascinated by calligraphy you can start developing your own modern calligraphy. I recommend that beginners start doing traditional calligraphy before doing it in their own style.

If you didn’t know, there are many important benefits of practicing calligraphy:

–It is meditative and relaxing. You can find it therapeutic as it is so relaxing while you practice it. That is because when you are creating each stroke you become more relaxed and your breathing is slower. You quiet your mind and allow it to relax. You can also listen to relaxing music while  doing calligraphy.

–It helps us to become more creative. There are studies that confirm that by keeping  our hands moving and our bodies active, we encourage our brain to think at a higher level. At this point creativity emerges.

–It stimulates neurological activity in certain sections of the brain.

–It develops the memory. Calligraphy activates the motor areas of the brain, which include the cerebral cortex, the basal ganglia and the cerebellum.

–It promotes critical thinking. When we encounter a problem in our thoughts, we resolve it better if we write it on a sheet of paper since the critical thinking process works better. When you are focused on doing calligraphy, your breath relaxes and you gain a deeper understanding of the situation.

-It increases haptic perception. Doing calligraphy increases the tactile experience if we use wooden pencils, wooden pens, etc that we lose when we use electronic devices.

–It can become a source of income money. What starts as a hobby can lead to a career. The average salary for a calligrapher in the United States is around $64,490 per year.

Each second Wednesday of August the globes celebrate World Calligraphy Day. A day where art meets handwriting. It’s August 11th, 2021 today so let’s celebrate it. The day offers an opportunity to practice, learn and celebrate the creative and beautiful art-form.

How to celebrate World Calligraphy Day?

-Get a calligraphy paper and pens and accompany the atmosphere with classical music.
-Set a table with calligraphy tools and invite friends to practice with you.
-Create beautiful calligraphies with lovely sentences like “Peace around”, “Love is forever”, “Respect Green Spaces” and give it to someone who needs to receive a message.
-Decorate your  home with great vinyl calligraphy sentences.
-Visit a Museum that hosts calligraphy exhibitions or a museum that has calligraphy scripts in its collections.  For example, you can find traditional calligraphy in medieval manuscripts at the National Art Library in the Victoria and Albert Museum in West London.
-Give a calligraphy book or magazine calligraphy as a present to someone or get one for you.

As calligraphy and letters are very important for Ya-Hub Translations, being a language company, in the name of the team I wish you a very happy World Calligraphy Day!

I finally found my necklace box with an emerald pendant, so after putting it on my neck, I will start creating calligraphy and I will write our brand name Ya-Hub in an artistic manner. It’s always  time to start something new and trust the magic of the beginnings.

I hope that you now feel inspired and ready to try different styles of calligraphy. It is a fantastic and unique craft that will enable you to learn and produce stunning artwork.