Hi Everyone! Let’s Start Writing Something! 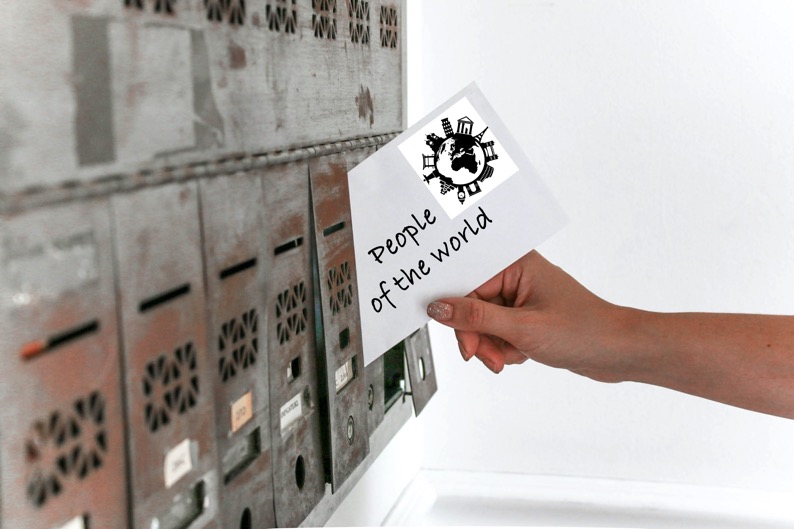 Dear People of the World,

On September 1st, World Letter Writing Day is celebrated around the globe. Everyone can join, including you, and have a break from the social media. Tempting?

Why don’t you write a letter to an old friend that you haven’t seen in a long time? I am sure your letter will draw a smile to whoever will receive it. Receiving a letter made up of pleasant and likable words surely cheers up people’s spirits.

World Letter Writing Day was established by Richard Simpkin in 2014 as a tribute to the joy and excitement he felt when a hand-written letter would arrive in his mailbox.

Now – about me. When I was a little girl, I wrote many different letters where I included songs, poems and greetings for diverse occasions. I always decorated them with stunning calligraphy and beautiful  letters. I used to write to members of my family who lived in cities far away from me. I also wrote for years to African children in need of help through UNICEF. I always imagined how happy they would be as much as I felt great when I received their responses.

I know that letters have an enormous meaning in society but they are being less used in modern times. We use electronic mails everyday instead and other social media messaging tools such as Instagram, Facebook, WhatsApp and LinkedIn to keep in contact with others.

If I am honest with you, I don’t remember when I wrote my first letter, nor what letter or inclusive words I wrote for the first time in my early years at preschool. Nevertheless, I remember very nicely that books had a magnificent meaning for me since I truly loved being immersed in them. I spent hours navigating  through letters, sentences, paragraphs and chapters.

One day I was looking for a new book in one of the bookcases from my library at home and there was a very interesting magazine that absolutely caught my attention. There was an “adventurous” picture on its cover. That was a huge green sailing boat with a sparkling rainbow on it and one dove as a symbol of peace and innocence. It was the most beautiful boat I had ever seen in my short age.

At first I thought: “Look at this boat! It looks like it’s coming from one of the story tales in my books although it is real!”. Then, I grabbed the magazine very enthusiastically. I found next to the window light a velvet couch to sit on and I started to read the magazine to learn more about this magical boat.

The boat had a name written on it and it said: Rainbow Warrior.

For a moment, as soon as I opened the magazine I felt in my soul that only good-hearted people could navigate that boat. Whilst reading I understood that peaceful earth activists were in disagreement with some governments.

I was 4 years old when I started discovering that our beautiful planet had a lot of problems already. Probes confirmed that the boat that had appeared in my magazine had been attacked by secret agents linked with the French government.

Wasn’t that terrible? How could a government order to attack a peaceful and innocent boat with people on board? How could they attack a group of people who defend our own green planet?

In 1985, French intelligent secret service agents under the orders of the French Government blew up Greenpeace’s flagship vessel “Rainbow Warrior” in Auckland, New Zealand. The French intelligence secret service agents sabotaged Greenpeace’s boat as the ship was preparing to head to sea to protest against French Nuclear bomb tests in the South Pacific. They ignited two explosive devices to sink the beautiful Rainbow Warrior with 12 people on board. Unfortunately, a Portuguese photographer who was among the Greenpeace members was killed too in this cruel act.

But… nobody can kill the spirit of peaceful earth activists. Fortunately.

The Rainbow Warrior, acquired at a cost of £ 37,000 back in 1977 had been used for peaceful purposes, yet a modern Western government in the middle of the 80’s chose to destroy it.

A second boat was built with the same name in 1989. In 2011 Greenpeace replaced the sunken boat with a new Rainbow Warrior vessel to carry in itself the original spirit.

Greenpeace and other non-governmental environmental associations such as the Extinction Rebellion in London are peaceful and defend the Earth to make it a better place to live.

The Earth provides to us through clean rivers, fresh air to breathe, fertile soil to grow our food, natural herbs medicines and beautiful landscapes to enjoy on holiday.

The inhabitants of our planet are taking it to the edge of its limits. We have been spreading so much waste and pollution all over the Earth. Now the climate around the world is in shambles with more frequent floods, intensive earthquakes, deadly heat waves and wildfires.

The Arctic sea cap is losing its thickness and sea levels keep rising. The IUCN Red List confirmed that out of the 63,837 species it had assessed that 19,817 were threatened with extinction because of human activities.

The contamination of the Earth comes through chemical contamination from fertilizers and pesticides, diesel emissions, oil spills – a vast “plastic continent” found floating in the ocean.

Please follow some of these tips to help our planet:

-Walk more and use your bicycle and public transports more often

-Recycle the rubbish you create during the day

-Volunteer to clean the beaches or parks

-Choose non toxic chemicals in your home and at the office

Remember to be a peaceful person, meditate, read interesting books, follow positive thinkers, exercise your body,  eat a lot of green food,  sleep well and take care of the nature.

You should also understand and respect the people who attend parades organized for groups who try to prevent some governments from burning our world. The contamination of our air and nature is caused by some governments’ actions and … it’s also caused by people who simply don’t take care. Bad.

I hope that this letter that I wrote as part of the World Letter Writing Day, will help you think about the importance of protecting our planet. Our own and only planet.